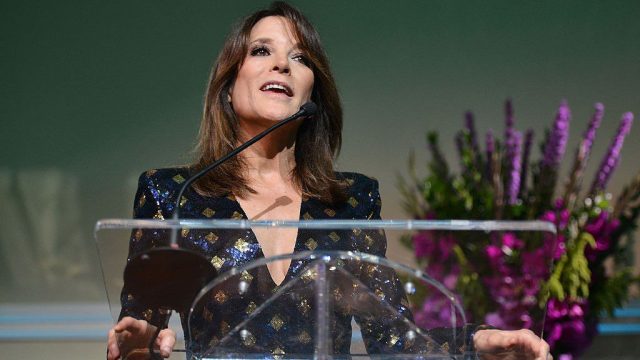 ― Marianne Williamson, A Return to Love: Reflections on the Principles of “A Course in Miracles”

Does New Age guru Marianne Williamson have a chance to win a place on the Democrat ticket?  Could this woman suddenly find herself only a heartbeat away from the reigns of power?  Could she become the next President of the United States?

The demographics would suggest the answer is YES!

According to PEW Research polling, people who identify themselves as “spiritual but not religious” comprise the fastest growing demographic in the United States today.  Additionally, 64% of Americans believe that there are no absolute standards of right and wrong and that right and wrong depend on the situation. And then there are the 51% of Americans who are unhappy, disgusted, or outright angered by the current political processes and/or are completely turned off by politics and religion in general.

The daily non-stop barrage of political dirty laundry aired by the mainstream media has taken a toll.  People are increasingly vulnerable to becoming ensnared by Williamson’s message of  “harmony”, “love” and corporate “unity”.  Her vision for a radical paradigm shift in how America views it’s place in the world isn’t just about re-shaping the political processes in the United States. It’s bigger than that. Williamson’s goal is to completely change how the world functions by completely changing how people think, act, and feel about themselves.

Williamson caters to the growing masses of people who can’t accept the stark, and often unpleasant, realities of life. Her masterful re-packaging of relativistic “feel good” New Age concepts provide an emotional security blanket readily welcomed by all who reject “politics as usual”. Her enlightened vision of a “world we choose” promises total freedom from the divisiveness exhibited between diverse cultures, contrasting societies, and fundamental religions.  Williamson promises to heal relationships and bring mankind into a “sea of love”, a place of “perpetual peace” and “total harmony”.

“The creative challenge of spiritual life is to know enough about God to be hopeful. From Jesus to Buddha to Moses to Mohammed, wayshowers have risen out of the timeline of history to draw maps and pave roads to a more perfect world.”

Williamson equates Mohammed with Moses and Jesus, giving the three equal billing as “wayshowers”, highly evolved beings who came to earth to show humanity how to achieve a more perfect world.  Williamson believes she is also a “wayshower” on par with those other “wayshowers”.  Williamson explains how any woman can attain to the level of “goddess”, as she has, simply by following the steps outlined in her Aphrodite Training Course.

It’s not just that Marianne’s supporters long for someone to lead them to the “promised land” or into a “better world”, (which they do), but what they really hope for is to see a better image of themselves when looking in the mirror.  However, if you look too closely at Williamson you might not like what you see.  People who have worked for her in the past say Marianne is totally enamored with her own opinions, completely consumed by self-love, and infused with an inflated opinion of her own abilities.  Marianne actually believes she is an enlightened being who has ascended to a higher evolutionary plain than the rest of us.  She views herself as a “goddess” who has a responsibility to destroy the old world and create a new world.  Yet Williamson often exhibits incredible hostility to others through her dragon-like temper outbursts.

Marianne Williamson in “beast mode” would be an unpleasant reality that most Americans simply aren’t ready for.  Folks who want to elect a “goddess” to lead America should re-read the Greek classics.  The Earth under the rule of all those self-indulgent Olympians was anything but peaceful.

Sources for this article include: